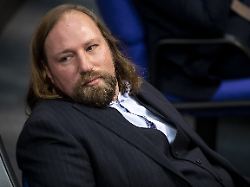 In the afternoon, several ministers meet at the Chancellery to discuss structural change in the automotive industry. For Green Group leader Hofreiter, a fixed date for the end of the combustion engine should finally be found.
Before the meeting on structural change in the auto industry at the Chancellery, the Greens had requested a fixed date from the federal government for the exit from the combustion engine. "We call on the federal government to present a future plan for the automotive industry," said Green Party leader Anton Hofreiter of the "Rheinische Post". In addition to a specified exit date for the internal combustion engine, this must also include an electric car and charging station offensive. Hofreiter also called for rapid implementation of the planned ecological reform of the vehicle tax. Both consumers and industry should be clear about which car model will be worthwhile in the future. Talking about the consequences of structural change The Green Group leader also called for "clear offers" to industry workers to deal with the consequences of structural change for them , Employees should have "the chance of a job with a future", through the right to further training and the introduction of a qualification short-time work benefit. In the afternoon (4:00 to 6:00 p.m.) Chancellor's Minister Helge Braun from the CDU welcomes representatives of the auto industry, unions, employers' associations and of the federal states with auto industry locations. Minister of Labor Hubertus Heil from the SPD, Minister of Transport Andreas Scheuer from the CSU, Minister of Economics Peter Altmaier and Minister of Education Anja Karliczek, both from the CDU, also take part in the consultations, which focus on the consequences of structural change for employees. According to a government spokesman, decisions are not yet expected.