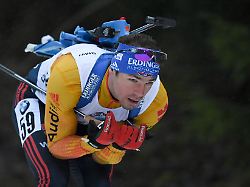 Without the two world champions Lesser and Schmepp, the German biathlon team starts the home world cup in Ruhpolding. Nevertheless, the new sporting director Eisenbichler is not afraid: the shape curve clearly points upwards.
The new biathlon boss Bernd Eisenbichler has given German ski hunters a great start to the new year. "The upward trend is clearly visible," said Eisenbichler to "Münchner Merkur". They made it into the top three in four races. "If we can bring that close to Ruhpolding, I'm very happy," said the new sporting director. With the good performances in Thuringia, the fire for Ruhpolding was lit again. "There is great anticipation in the entire team," said Eisenbichler before the second home game. In the Chiemgau Arena, the competitions begin today with the women's sprint competition on Wednesday (2.30 p.m.). The first men's race will start on Thursday – but without Erik Lesser and Simon Schempp. Eisenbichler has not yet written off the two ex-world champions, however, restpolding without Lesser and SchemppLesser had already been severely handicapped in preparation with a shoulder injury in the summer. At the start of the World Cup in Östersund, he showed in the relay how valuable he could be as a starting runner. "He will still get his chance to offer himself. At the moment he is completely in the IBU Cup," said the 44-year-old. The running form is wrong with him. "The coaches now have to see what else can be done to get him back in shape in a relatively short time. It is certainly not that easy at the moment," said Eisenbichler.