Menu
Home > news > Punk song line catches up with Greens: Minister distances herself from her own band 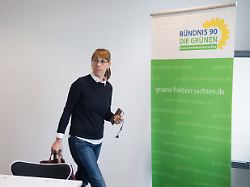 As a teenager, Saxony was Minister of Justice in a punk band. A line from that time now holds up the AfD to her after the attacks on police officers in Leipzig, thereby justifying demands for resignation. The Green politician defends herself – at that time she only played bass.
Saxony's Justice Minister Katja Meier of the Greens has justified herself after criticizing a violent lyrics by her former punk band. "I have always said that I do not share all the texts on which I played bass when I was 16 over 20 years later," she said in Dresden. "I condemn all forms of violence. There is nothing to justify violence and it must be dealt with using the rule of law. This also applies to the acts of violence on New Year's Eve in Connewitz," Meier made clear. According to a song by the punk band Harlekins, in which Meier played the bass in the 1990s: "Advent, Advent – one bull burns, first one, then two, then three." Criminals criticized a police officer in Leipzig for their punk past on New Year's Eve and accused the minister of earlier advocating violence. "If you ever thought it was great in your life that police officers burn, you can't lead the judiciary," said AfD deputy parliamentary group leader in the Saxon state parliament, Sebastian Wippel, and called for Meier to resign. hadn't made a secret of playing bass in a Zwickau punk band during the election campaign. According to her own statements, however, she neither wrote nor sang the lyrics.