Menu
Home > news > Paintball instead of bazookas: The Schweiger "crime scene" in a quick check 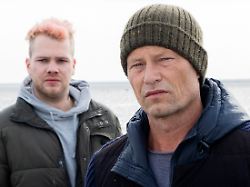 Nick Tschiller takes care of his own traumas and a handful of difficult-to-educate young people on a tiny North Sea island instead of dealing with the Russian secret service. The deprivation of violence works so well, Schweiger's new start all the better. The scenarioNick Tschiller (Til Schweiger) urgently needs a break: The mass slaughter of Kurdish gangsters and Russian secret service agents has drained the rough-legged law enforcement officer – and also the death of his wife (to whom Tschiller is not entirely innocent) and the rescue of his daughter from a trafficking ring showed the policeman that he could not continue as before. And that's why Tschiller is now taking care of his own traumas and those of a handful of adolescents who are difficult to educate on the tiny North Sea island of Neuwerk. It all works rather badly, luckily there is still the social worker Patty Schmidt (Laura Tonke), who offers Tschiller the reflection that the Superbull lacks himself. Commissioner Gümmer (Fahri Yardim) and his new colleague Pien (Zoe Moore) are having trouble starting. (Photo: NDR / Christine Schroeder) Safe boredom on the windy island comes to an abrupt end when Tschiller's old colleague Gümmer (Fahri Yardim) arrives at Neuwerk with the darknet drug dealer Tom (Ben Münchow). Tom was supposed to testify with his brother as a key witness in an important trial, but stupidly he was shot on the way to a safe house. Because Gurer fears a mole in his own ranks and especially does not trust his new and rather tough colleague Pien (Zoe Moore), he asks Tschiller to take care of Tom until the danger is over. A lonely island, a trigger-happy investigator for violence and an ominous threat: what should go wrong? The real message Less is more: Tschiller exchanges bazooka for paintball gun – and yet "Tschill Out" is more exciting than the violence and explosion orgies of the past The scene in which Tom catches his brother while watching a child's porn: The short scene, in which there is not much to see, creates terrible afterimages in the head. The plausibility factor for a silent "crime scene" is astonishing high: Even the ominous professional killer is not an ice-cold machine, but at some point gets cold feet and goes to donate. The evaluation "Ey Tschiller, do you actually know how perturbed your last name sounds?" asks a difficult-to-educate girl the difficult-to-educate Tschiller – and brings finally to the point, what everyone has always thought anyway. Because the name and title of "Tschill Out" are the worst part of the film, there are 8 out of 10 points for a brave new beginning.