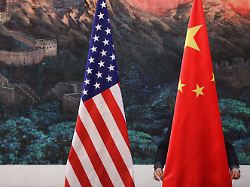 After a month-long trade dispute, the first trade agreement between the United States and China is to be signed. However, there will continue to be US tariffs on Chinese imports. US Treasury Secretary Mnuchin made this clear in advance.
The first trade agreement between the United States and China does not provide for a future reduction in US special tariffs on Chinese imports. The United States would maintain tariffs on Chinese goods pending a second agreement between the two largest economies in the world, said Treasury Secretary Steven Mnuchin. "These tariffs will remain in place until phase 2 occurs. If the president quickly puts phase 2 into effect, he will consider releasing tariffs as part of phase 2," he told reporters after months of tough negotiations in the trade dispute the USA and China want to sign a first partial agreement in Washington. For this purpose, US President Donald Trump is planning a ceremony in the late morning (local time) together with Chinese Vice Prime Minister Liu He, who also negotiated the deal.