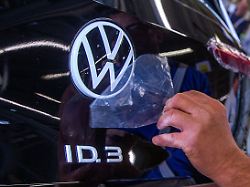 Thanks to China: Volkswagen underpinned its supremacy as the world's largest automaker last year. The core brand VW Passenger Cars grows in deliveries. Daughters like Porsche and Seat shine with even better numbers. But there is also less encouraging news.
Contrary to initial estimates, the VW Group increased its sales again in 2019 – and as the world's largest car manufacturer could thus keep its rival Toyota at a distance. According to current information, the Volkswagen Group delivered more than 10.97 million vehicles last year. This corresponded to a slight increase of 1.3 percent compared to 2018. VW benefits 184.96 In autumn, Wolfsburg had expected the value to stagnate – in some regions, demand for cars has recently weakened. At the core brand VW Passenger Cars, good business in China, in particular, had caught up at the end of the year, with a total increase in deliveries of 0.5 percent to 6.28 million vehicles. At the subsidiaries Porsche (plus 9.6 percent) and Seat (plus 10.9 percent), the growth was significantly higher in the past year. Audi achieved a 1.8 percent increase to almost 1.85 million cars delivered. Business at Skoda (minus 0.9 percent) and light commercial vehicles (minus 1.6 percent) was weaker. The heavy trucks and buses from MAN / Scania were also included in the sales statistics. A focus in the new year is the start of the pure electric car ID.3. In 2019, customers' interest in electrified vehicles from the group increased by about 80 percent to over 140,000 units. It will only become a mass business in the coming years. New year harbors uncertainties In the German home market, the VW Group sold a total of 6.2 percent more cars, and the increase in Western Europe was 4.6 percent. The bottom line of the Asia-Pacific region was slightly worse than in 2018 – however, the manufacturer in the most important market, China, has once again improved by 0.6 percent against the trend. The market share in the People's Republic also continued to increase. In the United States, sales grew 2.5 percent. However, the new year also harbors uncertainties for Volkswagen – economic power has declined in many countries, and at the same time enormous investments are planned to ramp up e-mobility. CEO Herbert Diess warned in December: "In economic terms, the alarm signals from China and the USA are increasing." In 2018, the VW Group was again the largest car group in the world in terms of deliveries. Toyota was in second place with 10.59 million, figures for 2019 are not yet available from the Japanese.