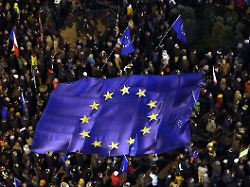 Is Czech Prime Minister Babis corrupt? Tens of thousands of Czechs think this and demand his resignation. Babis is under suspicion of subsidy fraud. There are already investigations against the billionaire.
Tens of thousands of demonstrators have called for the resignation of Czech Prime Minister Andrej Babis, suspected of subsidy fraud, in Prague. According to police, about 50,000 people took part in the demonstration on Tuesday evening at Wenceslas Square in Prague. A week ago, the Czech judiciary resumed its investigation into billionaire Babis. Babis, in office since the end of 2017, is said to have received millions in EU funding for the construction of his luxury resort "Stork's Nest" near Prague Companies were meant. For this he is said to have split off the hotel complex specifically from his large corporation Agrofert. Babis rejects the allegations. Czech media published excerpts from a report by the European Commission last week, according to which Babis is in a conflict of interest because of its dual role as politician and entrepreneur. The report recommends reclaiming state and EU subsidies amounting to € 17.6 million from Agrofert.