Menu
Home > news > "All for all": Kiev and separatists exchange prisoners 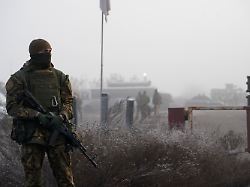 They come to a checkpoint in the Donetsk region by bus: prisoners of the government in Kiev on one side, prisoners of the pro-Russian separatists on the other. Their exchange is one of the most important results of the Ukraine summit a good three weeks ago.
The announced prisoner exchange between the Ukrainian government and pro-Russian rebels has started in eastern Ukraine. The exchange took place at the Majorske checkpoint in the Donetsk region, the Ukrainian presidential office said on Twitter, and Russian and Ukrainian television showed how vehicles drove to the checkpoint near the rebel stronghold of Horlivka. Live recordings broadcast by the Ukrainian presidential office showed two buses arriving in a field guarded by Ukrainian soldiers near the village of Odradivka, in the Kiev-controlled area, about ten kilometers from the front line. Journalists were not allowed access to the area. According to earlier reports, the separatists wanted to release 55 prisoners, Kiev in return 87. However, both sides said that the numbers were not final. Ukrainian media reported that the pro-Russian rebels would release mainly members of the Ukrainian army, detained activists and journalists.Result from Paris At the Ukraine summit three weeks ago in Paris, the "all for all" formula was agreed until the end of December Service. The agreement between Ukrainian President Volodymyr Selenskyj and his Russian colleague Vladimir Putin came through Germany and France, and the first major prisoner exchange in the Ukraine conflict that had been going on since 2014 had taken place in early September. At that time, Ukraine and Russia exchanged 35 prisoners each. This was seen as a sign of possible progress in resolving the Ukraine conflict. The 24 Ukrainian sailors who had been in Russian detention for several months were among those released. Ukrainian director Oleg Senzow was also released. Ukrainian government troops and pro-Russian separatists face each other in the eastern Ukrainian regions of Donetsk and Luhansk. According to UN estimates, around 13,000 people have died in the conflict since 2014.