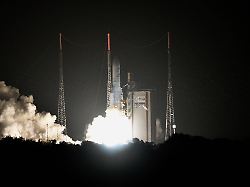 Almost 40 years ago, the first carrier rockets of the Arianegroup launch into space. 249 more successful launches follow. For the 250th time she has two communications satellites in her luggage.
With two communication satellites on board, an Ariane 5 rocket is successfully launched into space. It was the 250th launch of an Ariane launcher, as the operating company Arianegroup announced. The launch was made by the European Spaceport in Kourou in French Guiana. The very first Ariane rocket was launched almost 40 years ago on December 24, 1979. In the "luggage" the Ariane 5 rocket had two communication satellites – one for the Egyptian government and one for the British company Inmarsat. It was the fourth launch of an Ariane 5 rocket from Kourou this year. Actually, the launch should have been done last Friday. He was initially postponed to Monday due to an "irregularity" in the start preparations. Also on Monday but the rocket could not take off – because the weather was too bad. On Tuesday evening but now the start took place.