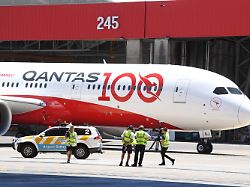 If you want to travel from Europe to Australia by plane, you have to plan a stopover – at least until now. Now the airline Qantas completes a non-stop flight from London to Sydney, setting a new record.
With a nonstop flight of 19 hours and 19 minutes, the Australian airline Qantas has brought 46 passengers directly from London to Sydney. The Boeing 787-9 Dreamliner landed at noon (local time) at the airport of the Australian metropolis. The track of 17,750 kilometers has never been completed so fast, so it is a new record. The behavior of the passengers on board was analyzed in detail. (Photo: REUTERS) The aircraft was sparsely populated for the test flight and barely had any cargo on board. The crew consisted of only six people. 2022, the route should be served regularly. It was only the second time that the track was flown without a stopover. At the premiere in 1989 – then with a Boeing 747-400, also for Qantas – it took more than 20 hours. In 1947, the route required five more days and six stopovers. The longest regular commercial flight is currently the route between Singapore and Newark on the US East Coast. The airline Singapore Airlines needed for 18.5 hours. The flight QF7879 started on Thursday morning at six o'clock at the London Heathrow airport and flew in the following 19 hours Germany, Poland, Russia, Belarus, Kazakhstan, China, the Philippines and Indonesia. Passengers and crew experienced two sunrises during the trip. The passengers on board were Qantas employees and frequent flyers. Their sleep, exercise and eating habits were recorded during the flight. Researchers at the University of Sydney's Charles Perkins Center hope to gain insight into how extremely long flights impact on health, well-being and the inner clock.