Menu
Home > news > Rosenkavalier 2020: He is the new Bachelor 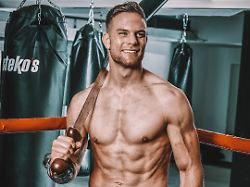 It will not be four months before the new season of "Der Bachelor" starts on RTL. The station has already announced, however, whose favor the women this time court. His name is Sebastian Preuss, and he finally wants to find his dream wife.
Sebastian Preuss will be the ninth Bachelor. At the beginning of next year, the 1.91-meter bachelor will deliver roses to some of the 22 ladies who fight for his heart at the villa. The 29-year-old Preuss comes from Munich, is a painter by profession with his own company and also professional kickboxer with world title. "I love life, nature, sportiness, people," he describes himself. He has been single for a year and a half. "I have been in two long relationships, but they have not lasted long," he says, adding, "once for five years and once for a year and a half." The paths would have split, but now he would be ready and would be interested in "a new, a great love". He blames himself for the end of his last relationship above all else. "I was pretty focused on the sport, caring There were three fights for me, so unfortunately there was no time. " They separated in February 2018, but it took him a whole year to get over it, according to Preuss. The dream of becoming a father A well-groomed appearance and a healthy lifestyle, but above all a good heart, loyalty and honesty are the best Requirements to inspire Preuss. Then his biggest dream should not stand in the way: To become a father! His motto of life is: "Be happy and content and always think positively". But not everything went according to plan in his life: "My mother was a single parent with three children and had to work a lot." I slipped, hanged myself on false friends and dammed me up until I was 18 years old Year in prison for assault, "the aspiring Bachelor admits. But he learned from his past mistakes and completely changed his life after that time. Today, he appreciates life and looks positively to the future: "Unfortunately, I can not change everything that lies behind me – I can only do it better, I work on it every day." The ninth season of "Der Bachelor "runs from early 2020 on RTL. Incidentally, with TVNOW you can see the episodes again seven days in advance. The time can pass until then with "Bachelor in Paradise". The second season starts on October 15 on RTL, the first episode is already on TVNOW.